A Call Towards A Theology of Littleness: Hearing Luke 12:32

“To be faithful in little things is a big thing”

Big-ness & Big-Talks :
Have you ever heard of a Church named as 'little flock'? On googling I did find some churches named after 'little flock' but their mission statements forces us to probe whether they have ever lived as 'little flock?' Have you seen Christians of 21st century calling themselves 'little flock?' The demography of global Christianity today is unevenly characterised on the one hand by the expansive nature of Christianity with numbers rapidly growing in some parts of the world, and on the other hand witnessing the shrinking numbers of Christians in other parts of the world. One of the visible markers of the expansive character of global Christianity is the growing culture of 'mega churches' where the founders and the followers of such churches take pride in the capacity capability of their Churches and boast of tens and thousands of people attending their worship services. Such mega culture of the churches speaks the language of capitalism, where the mega rich leaders of such churches proclaim that he or she is in the business of Jesus Christ, whose corporation is an 'Unlimited' enterprise. These churches encourage people attending their churches on becoming rich as being 'blessed' and preach on 'prosperity' as a blessing that follows those who believe in their teachings. The language and practices of these growing dominant mega churches are part of a colonial project where they colonize simple Christians by exploiting their vulnerability of faith all in the name of riches, wealth, blessing and treasures. This has a huge influence on the kind of God-talk and theology that these mega churches project and articulate. Out of this grand mega culture emerged the ideas of God as all powerful, God as almighty, God as King of Kings, Lord of Lords etc. for it is the rich who associate God conveniently to be rich, powerful and strong like them, and therefore talked of God in those expansive and expensive terms. 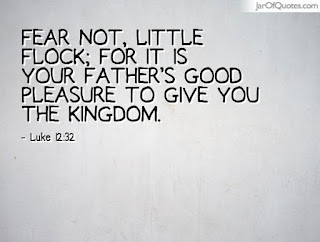 In the background of this context, we now read Luke 12:32 -40, where the gospel comes afresh 'Do not be afraid little flock for it is your Father's good pleasure to give you the kingdom.' (v32) , which comes as a call towards a theology of littleness, for church exists as 'little flocks' and God is located in 'littleness,' in contrast to the churches as 'mega churches' and God and God-talk in the vocabulary of 'bigness.' From the parable of the rich fool in Luke 12:13-21, we acknowledged that Jesus' teaching as 'life is not in the abundance of riches or possessions' and 'life is not me, my and mine alone.' Luke presents in this chapter about Jesus' exhortations on wealth and earthly treasures, and intersperses it in the context of fear, anxiety and worry. In this particular text, we see Jesus calling the listeners as 'little flock,' and then explains about what it means to be little by way of selling the possessions and then linking it to slaves, who are the little ones of his times for they have been waiting for the Son of Man's coming. This text therefore helps us to unravel a theology of littleness, for it is a gospel imperative for our times.

Little Flock and Theology of Littleness:
Who according to Jesus are the 'Little flock?' For that would define the character of littleness. We need to see this question in three different perspectives. Firstly in the historical perspective, it were the disciples who were listening to Jesus as he was preaching to them. Therefore in the context of the multitudes following Jesus, this little flock of twelve disciples could have been the 'little flock' to whom Jesus mentions not to be afraid. In the context where Roman armies were counted in tens and thousands, Jesus' dozen disciples represents the 'little flock.'

Secondly, in the theological perspective, Jesus introduced himself as 'good shepherd' and mind you not as 'big shepherd,' by which he was always trying to locate himself in the 'little flocks' and affirm in their identity as being little. If he believed in mega flocks, he should have identified as mega shepherd, but he was a good shepherd, who had come to give life in all its fullness. 'Little flocks' represented the minority people in contrast to majority, for Jesus said elsewhere that, 'wherever two or three are gathered there he is present' for God in Christ locates among the littleness. Littleness theologically is further understood that Jesus became a human and took on the form of a slave, the powerless, for the sake of slaves to pitch his tent among them so that he is willing to struggle along with such communities ensuring liberation and freedom. Littleness of little flocks is further understood by his engagements with the outcastes, women and poor of his times. God in Jesus is born as a little baby in the little town of Bethlehem, God in Jesus has became a child refugee as he fled into Egypt and God in Jesus resided, identified and was crucified in all his vulnerability. Jesus therefore had to categorically say that unless a person becomes a little child, he or she is not eligible to enter the Kingdom of God. When his disciples were arguing among themselves who is the greatest, Jesus picked up a little child as a greatest, for he acknowledged that in the littleness exits God and god like-ness.

Pope Benedict therefore affirmed in the theology of littleness as he said, “The theology of littleness is a basic category of Christianity. After all, the tenor of our faith is that God's distinctive greatness is revealed precisely in powerlessness. That in the long run, the strength of history is precisely in those who love, which is to say, in a strength that, properly speaking, cannot be measured according to categories of power. So in order to show who he is, God consciously revealed himself in the powerlessness of Nazareth and Golgotha. Thus, it is not the one who can destroy the most who is the most powerful...but, on the contrary, the least power of love is already greater than the greatest power of destruction.”1

Thirdly, in the eschatological perspective, no doubt all those who follow the values of the gospel that Jesus taught which include hard facts like selling of possessions, sharing of resources etc. will certainly be a small group, for in Jesus movement many left grieving on hearing such altar calls to go sell their possessions, to give up their riches etc. and therefore they will be little flock and little group any way, and as such Jesus was calling them 'little flock.' Probably that was the reason in Luke's second volume, which is Acts of Apostles, he mentions that the early Church gathered in houses and had everything in common, where they shared their resources among them. They were 'little flocks.' Jesus says, “It is your Father’s good pleasure to give you the kingdom.”32 verse says, not to be afraid of Rome, of any circumstance for Father out of his good pleasure gives you Kingdom. In other words, Kingdom belongs to the little flocks and little ones. Jesus else where picks a little child and says that kingdom of God is like them. Kingdom of God is of the little ones, for little ones by the God of little ones, for God in God's pleasure grants this Kingdom to the little ones.

It was said of St. Theresa of Alva that she always displayed the spirituality of littleness. “When we think of Thérèse we think of a specific kind of spirituality - her Little Way. It is a way of trust and absolute surrender to God's intimate presence. Scripture is her source and inspiration. Three texts in particular bring into focus the heart of Thérèse's doctrine: "Whoever is a little one, let them come to me." Proverbs, 9:4 "For to the one that is little, mercy will be shown." Wisdom 6:7 "As one whom a mother caresses, so will I comfort you; you shall be carried at the breasts, and upon the knees they shall fondle you." Isaiah 66:12-13 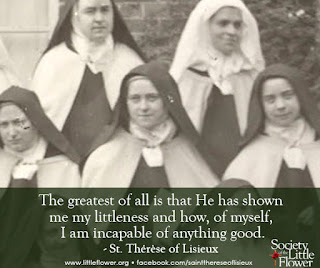 In a prayer to Christ, Thérèse sums up her spirituality for us:

"O Jesus! Why can't I tell all little souls how unspeakable is Your condescension? I feel that if You found a soul weaker and littler than mine, You would be pleased to grant it still greater favors, provided it abandoned itself with total confidence to Your infinite Mercy. I beg You to cast Your Divine Glance upon a great number of little souls. I beg You to choose a legion of little Victims worthy of Your LOVE!" 2 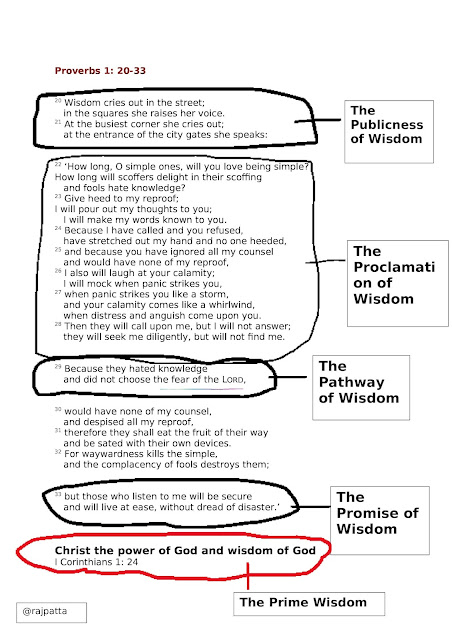