Setting our minds on divine things: Reflecting on Mark 8:31-38

On encountering the voice of God through the word of God and having experienced the call of God to go into ministry, when my dad suggested that I go for ministerial training and engage in theological education for four years, I resisted that advice, arguing that time is short and the Lord is to return soon. Then I proposed to my dad that I will go as a missionary immediately, for I thought the harvest is plenty and the labourers are few. I was 20 years old then and was waiting for my final year University results. During that period my dad was counselling me about my call and vocation. When my dad was encouraging me to go into theological education so that it will help me in understanding the relevance of the word in our world, I was resisting my dad’s advice by quoting several scriptural statements like, ‘Go into the world and make disciples for me.’ My dad, who was well versed with the scriptural texts, held his peace and kept his cool, listening patiently to all my reasons for resisting to go for four-year ministerial training. After a long conversation, my dad advised me to wait in prayer, set my mind on God and listen to God’s guidance for my future. He came to me the next day and said why don’t I give it a try to write the entrance exam at Gurukul Lutheran theological college at Chennai and if I succeed in that test then take it as a sign that God is wanting me to pursue ministerial training, and if I fail in that entrance test, then let’s take it otherwise. It sounded like a plan and agreed to follow all the procedures in writing that entrance exam. As the entrance test results were announced, I passed out in flying colours and eventually joined the ministerial training and pursued theology, initially for four years and then for seven years. Ever since then my love for theology has never stopped. In all of this all I can testify is that I have sensed and experienced the hand of God with me. When I look back and reflect on my faith journey, those words of my dad, “to wait on God and to set my mind on God” at that moment in time stands out prominently as it helped me to see through the signs of God’s hand in my life. Waiting on God and setting our minds on God is always rewarding and refreshing.

The text for this second Sunday in Lent from Mark 8:31-38, is a passage where Jesus publicly shares about his suffering, death and resurrection. Peter was the first to react to such a sharing and rebuke Jesus. In return Jesus rebukes Peter to set his mind on divine things and not on human things, and further explains to the crowds what it costs and takes in following him. Why did Peter rebuke Jesus on hearing that the Son of Man is going to suffer, rejected by the chief priests, elders and scribes and be killed and after three days rise again (31v)?

Peter joined the Jesus movement and declared that Jesus is the Christ (29v), the messiah, who has come into this world to drive away the Roman empire and bring freedom and liberation to all people. Peter was a witness to many miracles, healings and radical teachings of Jesus Christ, the messiah, but suddenly on hearing that the Son of Man is going to suffer and die, Peter couldn’t take it, for he could not imagine Jesus to be a sufferer, a victim, dying at the hands of the Roman empire. Though Jesus did say that after three days of his death he will rise again, he couldn’t believe it to himself, and did not appreciate Jesus’ sharing it openly. Perhaps, if it were at their team meeting, where Jesus said about the things to come, including his death and resurrection, Peter could have understood, but now that Jesus shares this news about his future in the open, in the public, Peter couldn’t resist but took Jesus aside and rebuked him. The next reaction Mark records is of Jesus’, where he turns and looks at his disciples rebuking Peter saying, “Get behind me Satan! For you are setting your mind not on divine things but on human things” (33v). Mark did not record the reactions of Peter to such a rebuke, but I certainly think Peter would have had a long face and he would have remained silent. Jesus has always been a cool guy, and hardly he loses his cool, and this is one of those occasions where he loses his cool and rebukes Peter and calls him to set his mind on divine things and not on human things. How is it that Peter has set his mind on human things and not on divine things?

The term Son of Man is used by Jesus 80 times in the Gospels, with 14 times mentioned in the Gospel of Mark. 8 of Mark’s 14 Son of Man sayings contain references to Jesus’ death, suffering and resurrection, and that explains the reason for Jesus to refer to himself as Son of Man. The audience of Mark knew the title Son of Man from the apocalyptic literature, particularly from Ezekiel and Daniel. Peter most likely would have known this usage of Son of Man from Daniel, where he mentions Son of God as the one coming to rule and have authority over the entire world. It is important for us to read what is mentioned by Daniel as he records about the Son of Man in Daniel 7:13-14,

“As I watched in the night visions,

I saw one like a Son of Man coming with the clouds of heaven.

And he came to the Ancient One and was presented before him.

To him was given dominion and glory and kingship,

that all peoples, nations, and languages should serve him.

His dominion is an everlasting dominion that shall not pass away,

and his kingship is one that shall never be destroyed.”

So, for Peter and the rest of the first century Palestinian community, the image of the Son of Man is that he comes with majesty, magnanimity, and magnificence, where he will hold dominion over the earth and heavens. When Peter knew the textual understanding of the Son of Man that he is going to come with power above all powers, and was certain about his understanding of the Son of Man, suddenly on hearing Jesus saying that the Son of Man is going to be rejected, suffered, died and risen, Peter couldn’t tolerate and therefore rebuked Jesus. To put it simply, when Peter’s literal reading of Daniel’s Son of Man passage did not match with Jesus’ sharing of the Son of Man, Peter rebuked Jesus. Perhaps Jesus on recognising that Peter was turning out to be a literalist exhibiting his reluctance to see word becoming flesh in Jesus Christ, he rebuked Peter. Jesus as the Son of Man was translating and offering a new meaning to his being the Son of Man as the one who is to be rejected, suffered, died and risen. Such a literalist way of looking at the Son of Man, a reluctance to recognise the word becoming flesh in Jesus Christ and a lack of public theological sensitivity to see Jesus’ relevance in his context, is what I think Jesus notices and called Peter to set his mind on divine things and not on human things. 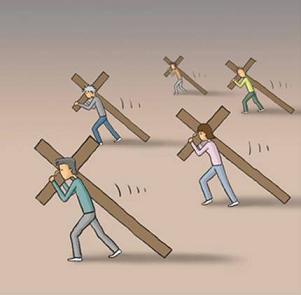 This given text invites and calls us to set our minds on divine things today. The text calls for a deeper spirituality, inviting us to offer ourselves to identify with the powerless and the suffering communities. This text also invites us not to be literalists with our texts, but are called to translate the word into action relevant for our public sphere. A literal way of reading our texts is like setting our minds on human things. The landscape of our church and society has changed and is changing, very much due to Covid and lockdown, and in such a scenario, we as followers of Christ can only be relevant by being with people who are struggling in life, and with communities who are poor and marginalised. It was reported this week that Covid is at a risk of becoming a disease of the poor, where it mentions that people living in the deprived locality with ethnically diverse communities, the rates of infections are high and the intake of the vaccines are low. Do we not have a conscience as a church to ask why is Covid becoming the disease of the poor? Should we not be in the forefront speaking truth to the powers and seeking solutions in addressing poverty and Covid? Unless we as a church can set our minds on divine things by addressing these concerns around us, we may lose our relevance. Secondly, with the arrival of approximately 100,000 plus migrants from Hong Kong into the UK this year, due to the geo-political problems in their country, we can set our minds on divine things by being a welcoming church today. Some might ask are these concerns of poverty, welcome etc. divine things? Well, at the heart of the divine in Jesus is the poor and the marginalised, and our commitment to following Jesus Christ is only demonstrated in our being with the marginalised communities, for Jesus has come to preach good news to the poor, give sight to the blind and release the captives from the bondages.

Those words of my dad, “to wait on God and to set my mind on God” have always been journeying with me, reverberating in me, allowing me to depend on God, despite all my vulnerabilities in life. This season of Lent is an invitation for us to set our minds on divine things, to translate the word into action, to activate our faith into praxis and to carry our crosses and follow Jesus Christ. It is said that, ‘for it is easy to wear a cross, but it is a challenge and risk to bear a cross.’ May God in Jesus grant us the needed strength in bearing the cross and follow Jesus faithfully by setting our minds on divine things. Amen. 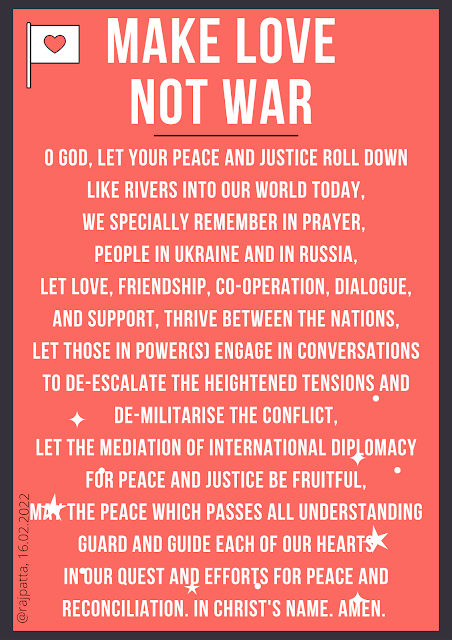